Version 2.2 of Genshin Impact – dispel the mystical fog that envelops the island of Tsurumi! – GameBlog24

Hello travelers! Your developers from Genshin Impact are back to bring you the latest information on the latest update to Genshin Impact! With version 2.2 “Into the Labyrinth of Fog”, which will be released on October 13th, we present you the last of the six main islands of Inazuma. And Thoma will appear again as a playable character with his invitation event. In the meantime you can face new challenges in Inazuma with Tartaglia and Xinyan or simply spend a wonderful time with old friends in Liyue, Lunar City or in your own Kannenreich.

If you haven’t received the free 5-star figure Aloy, the “savior from another world”, you should definitely try it out in version 2.2. You can also get “Predator,” a special bow tailored for Aloy, and go hunting together in the world of Teyvat.

The main islands of Inazuma are all different from one another, and Tsurumi Island is perhaps the toughest nut for all travelers and adventurers. The impenetrable mist that covers the whole island keeps most strangers away. You have to find your way in and always be careful not to lose the way in the fog that you can hardly see through. 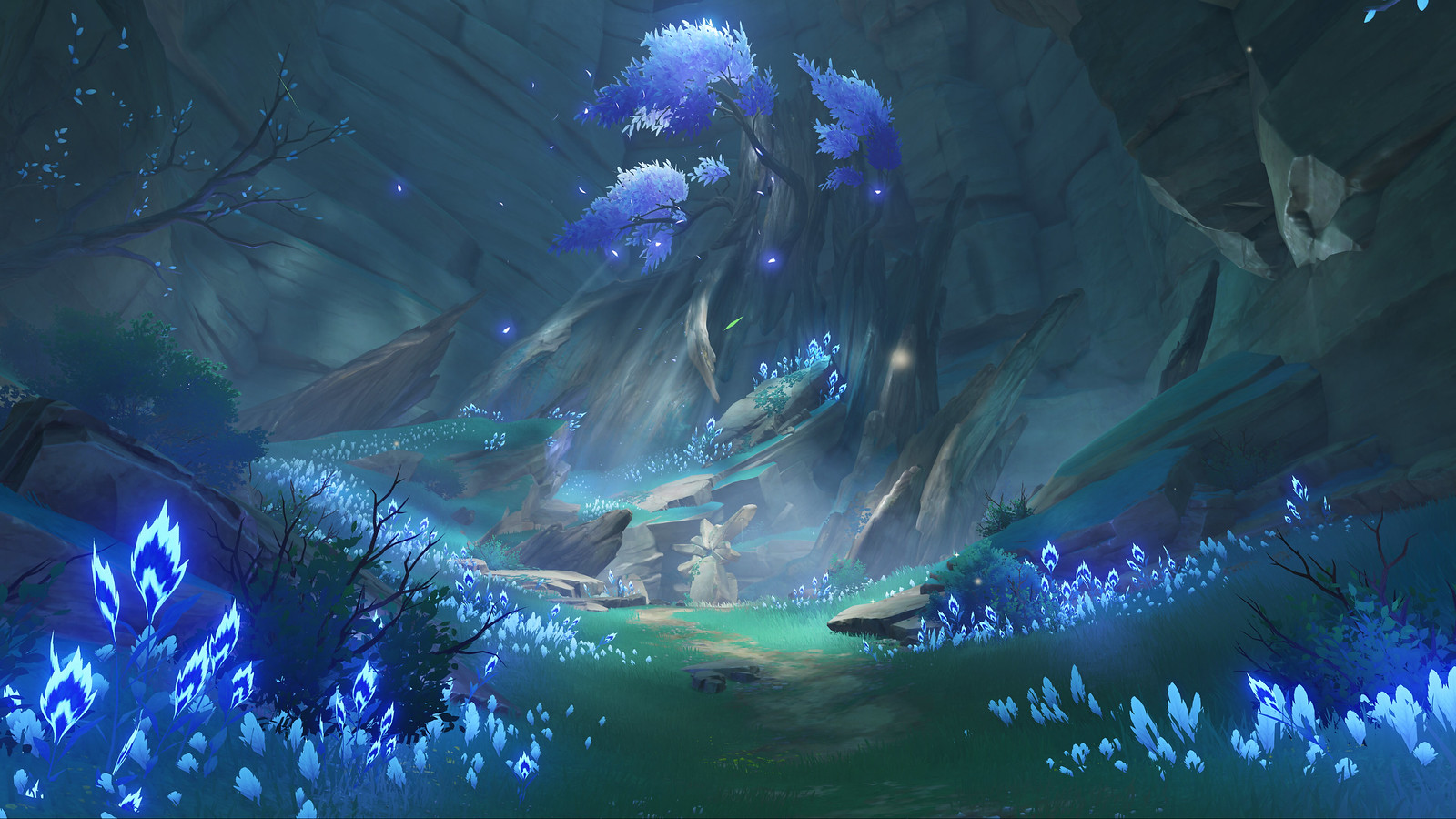 And there are various new monsters lurking in the gloomy fog. The Garme and Garmwelpen are insidious monsters from the abyss who can go invisible to wait for the best opportunity for the next blow in battle. Both the Garme and the Garmwelpen have very powerful geo-power or electrical power. But what makes this species really dangerous is its ability to use the Corrosion effect on enemies. As soon as their attacks hit an active figure, all figures in the troop are affected by the “corrosion” and constantly lose life points, regardless of whether they have a shield or not. So beware of these monsters in any case! 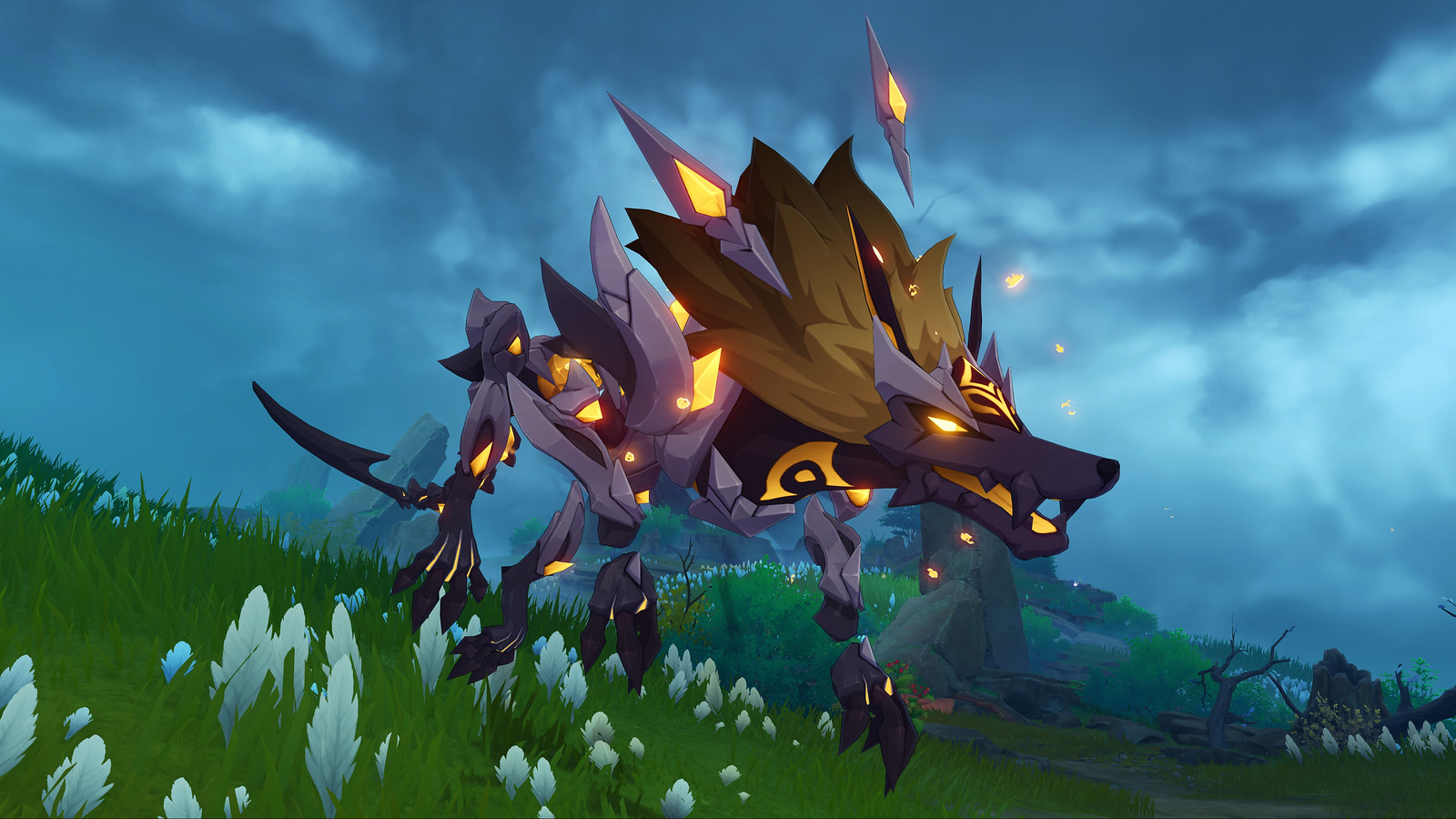 In addition, the island of Tsurumi appears to be the focus of recent research by a scholar from Sumeru. In the “Shadows of Antiquity” campaign you can team up with the scholar from Sumeru to form a research team and do research in Lunar City, Liyue and Inazuma in order to defeat a “Colossus Ruin Special Model” that seems to be constantly drawing power from an unknown source of energy thereby revived.

We believe many of you have been busy exploring new areas of late since the Inazuma region opened this summer. Now that the cool autumn is slowly approaching, it might be a good time to hang out with your friends from Inazuma, Thoma and Sayu, take on a new challenge with Tartaglia and Xinyan, or just play the new rhythm game with more friends. 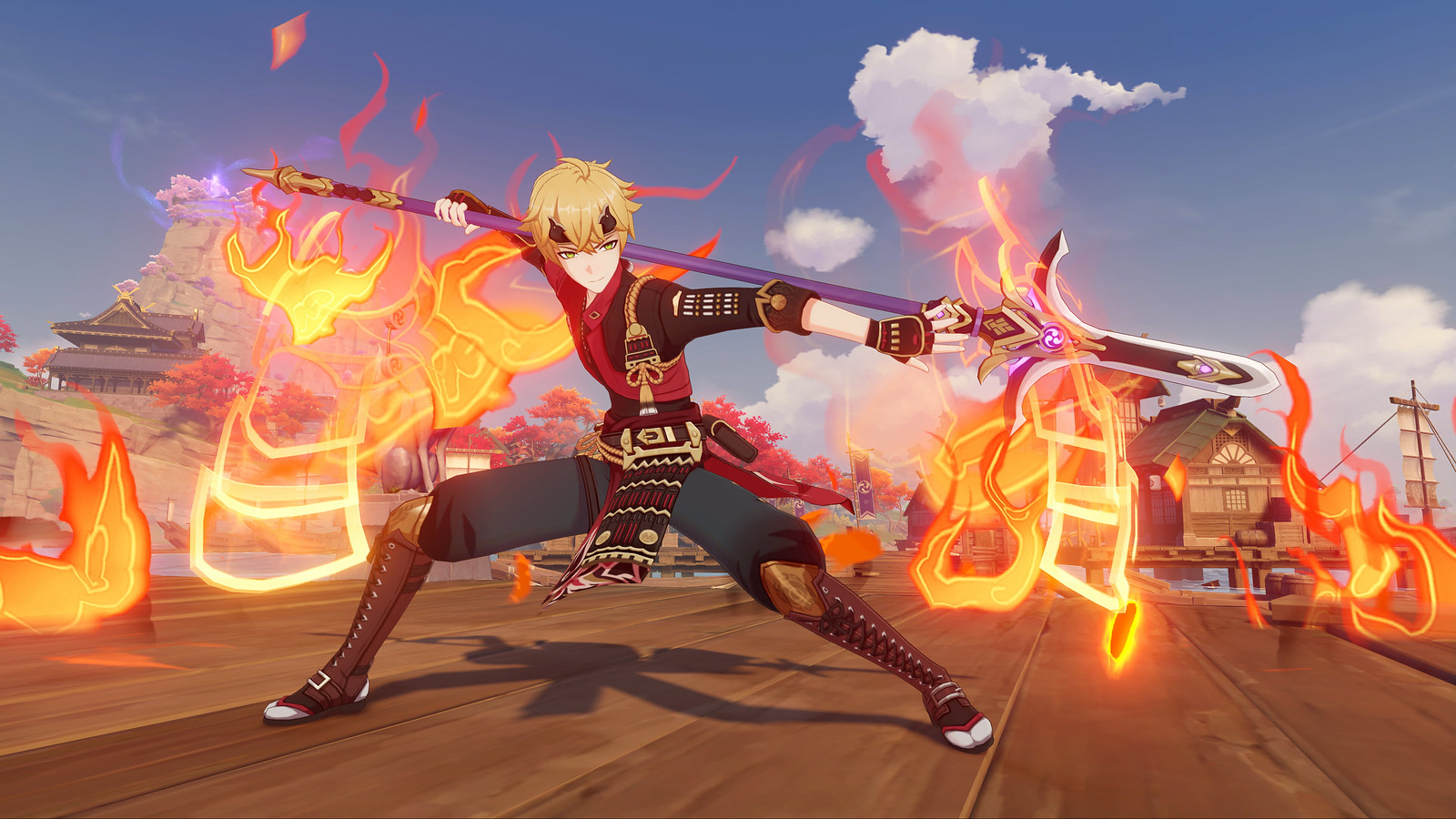 First of all, Thoma, who accompanied the travelers in the storyline of Inazuma, will appear as a new playable 4-star character. Thoma, known in Inazuma as the “mediator”, is also a reliable member of the troops in combat, providing strong defenses and reinforcements. Thoma uses a polearm and has pyro power. With his elemental ability “Blazing Blessing” he can inflict pyro area damage, give himself the Pyro attribute and at the same time protect with a “Shield of Blazing Blessing”. If the “Shield of Blazing Blessings” exists, the amount of damage it prevents can be stacked when a new “Shield of Blazing Blessings” is obtained, which will also reset its duration. With his special ability “Red Ooyoroi”, Thoma can support his troop members with additional pyro attacks on opponents. He even has a special talent that has a 20% chance that travelers can get twice the return on successful fishing. 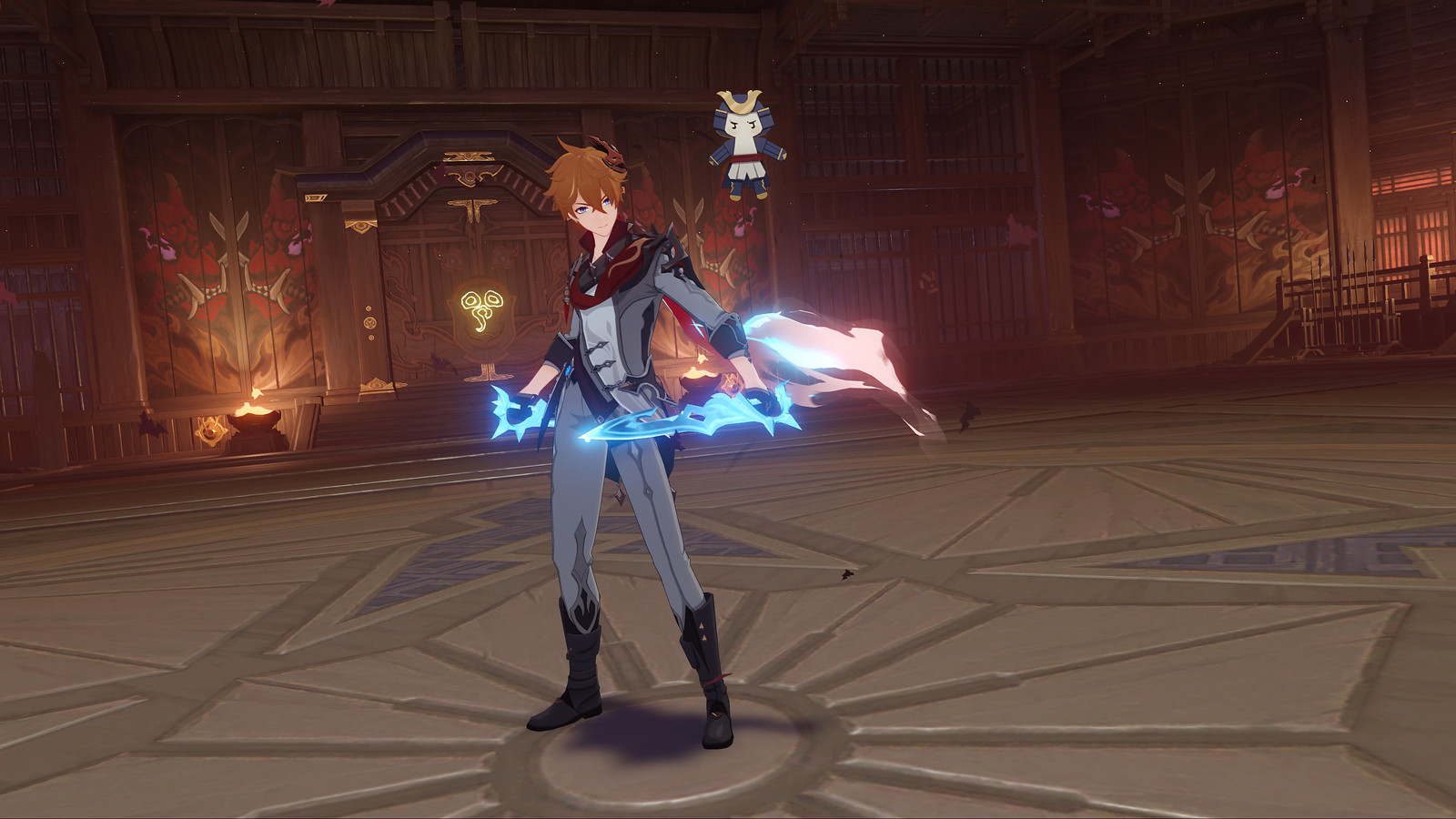 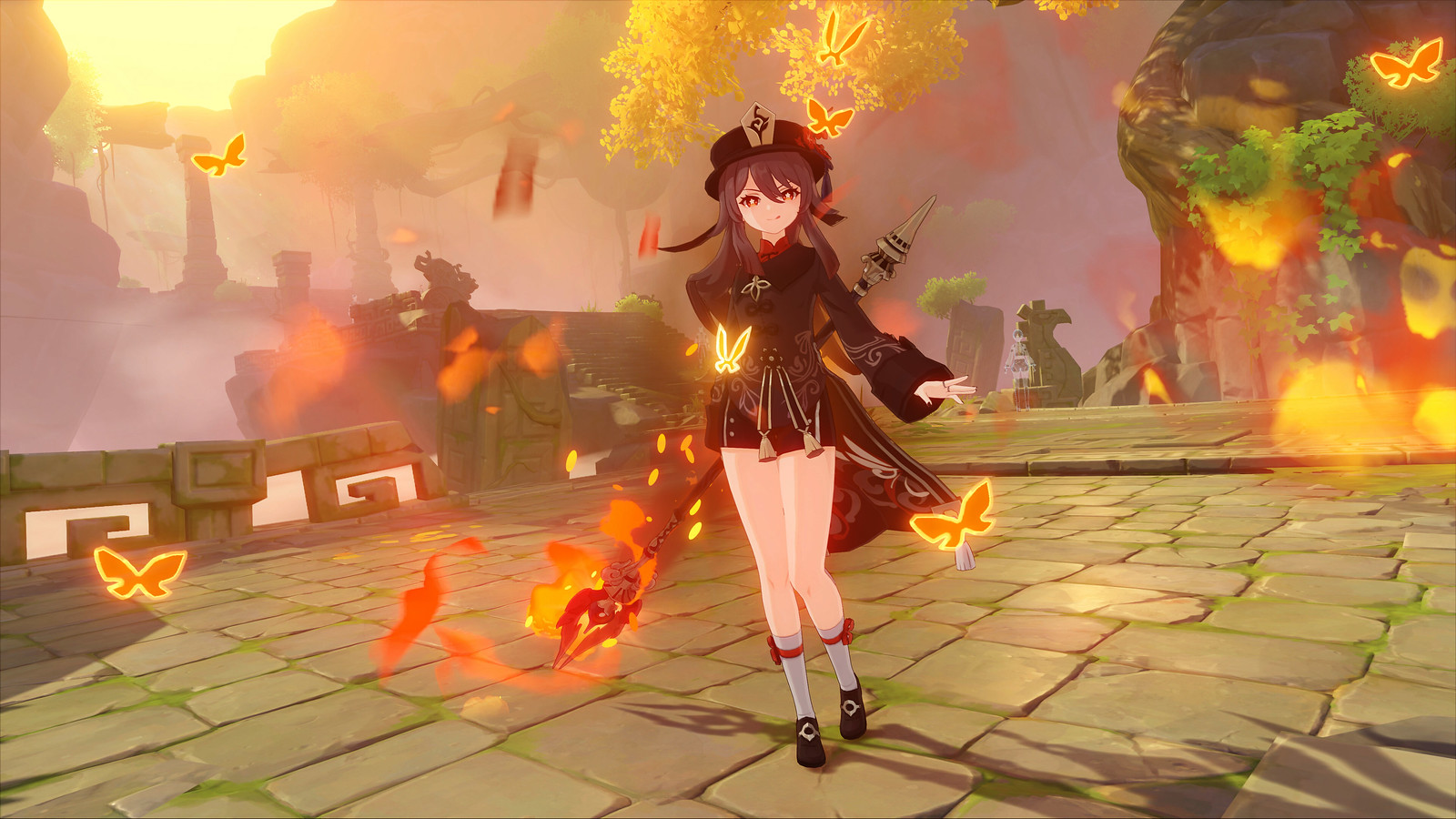 Two old friends, the last of the Fatui eleven, “The Count” Tartaglia and the rocker Xinyan von Liyue, also visit Inazuma during the “Labyrinth Warrior” campaign. In addition, you will contest a sphere called the “Mystical Onmyou Chamber” in the company of a strange paper figure called “Shiki Taishou”. “Shiki Taishou” can provide you with special help and reinforcement. Apart from that, as always, hard fights and valuable rewards, which you can get at the promotional dealer, are waiting for you. In addition, the Count will appear again in his action prayer, followed by Hu Tao and Thoma in the later action prayer. 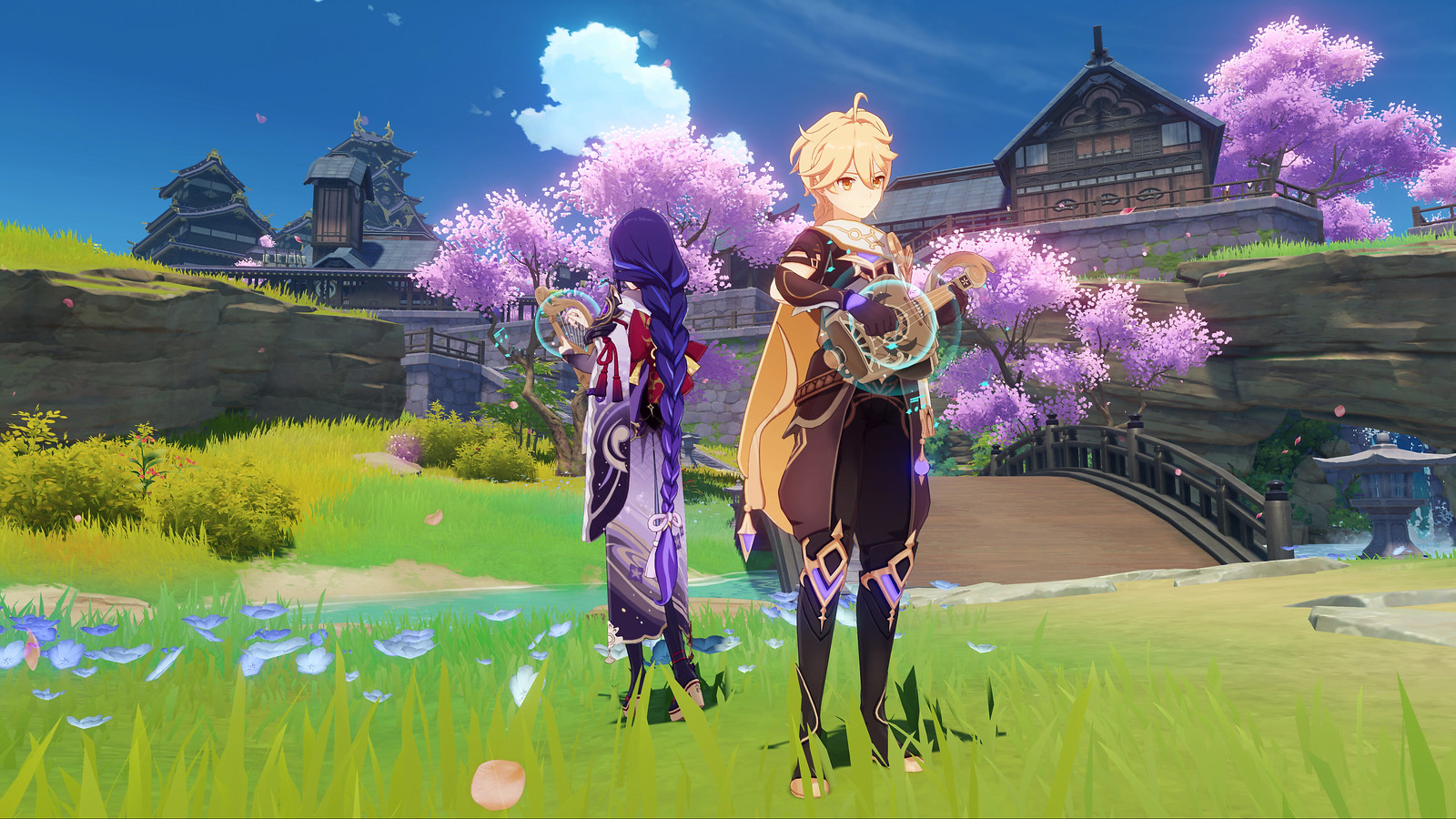 Last but not least, if you enjoy playing rhythm games, now is the time to show everyone what you can do! In the “Sounds of the World” campaign, you can get a new instrument, the “flower zither”, and play music with Ningguang, Zhongli, Keqing, Xiao, Kokomi, Ayaka and Shougun Raiden in different areas.

Time for you alone in the Kannenreich

With version 2.2 we are adding even more new functions to the existing gameplay. For those of you who love the jug of impermanence, now is the time to think about how you can transform your jug ​​kingdom again! 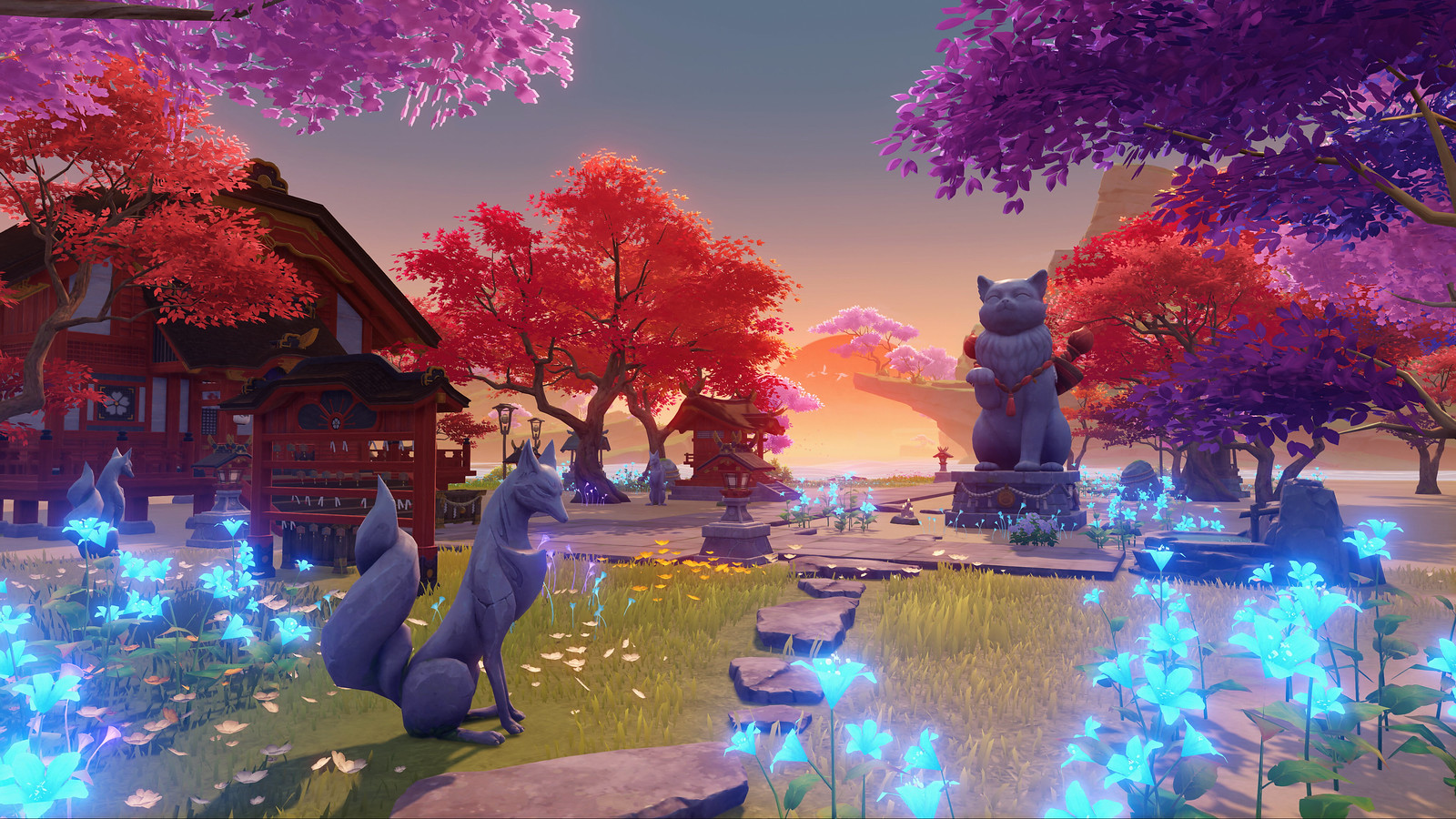 The brand new Inazuma-style “Silk Courtyard” can now be unlocked by travelers who have raised the favor of the holy Sakura to level 40. In the upcoming version, you can also expect more Inazuma-style decoration blueprints, which you can get from Tuber, the Holy Sakura, certain world missions or a new type of chest called “Special Chests” on the island of Tsurumi. 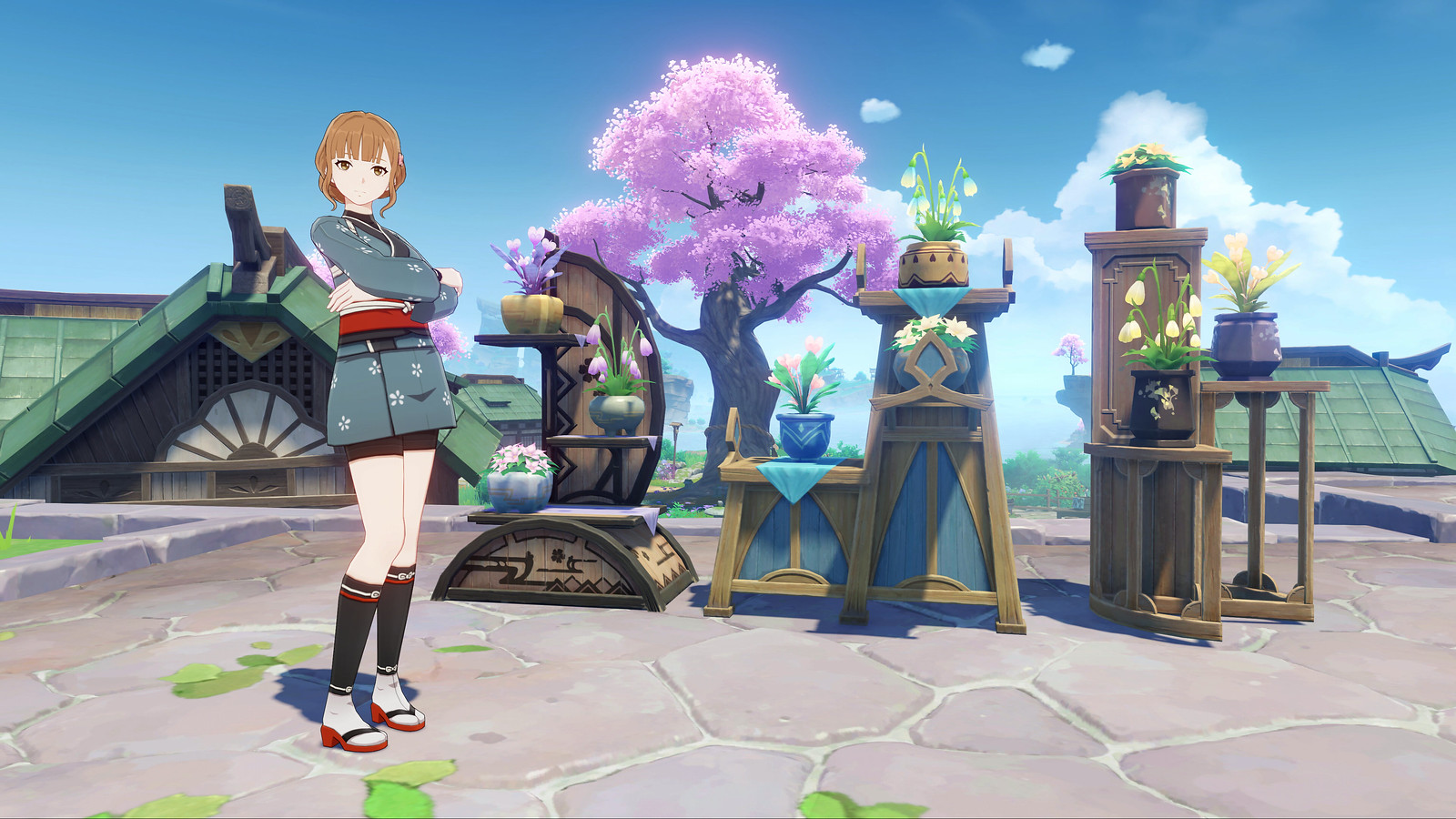 Besides the Inazuma style decorations, we are also adding a new type of decoration and flowers. With the floating platform you can now build your own residence. In the “Dreams of Blossoms” campaign, you can grow special flowers and use them as decorations for your pitchers.

In version 2.1, our team tried the adaptive trigger for the first time and incorporated it into the fishing style of play. When you pull up your fishing rod to catch the fish, you can feel the changes in tension on the line when you squeeze the R2 trigger. We also added more haptic feedback to some scenes, objects and characters.

And that’s it for today, dear travelers! So don’t forget to explore Tsurumi Island. We wish you an exciting adventure in Inazuma!

Give us a call or fill in the form below and we will contact you. We endeavor to answer all inquiries within 24 hours on business days.